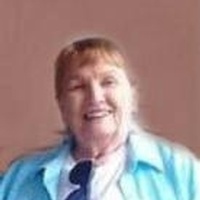 Wilma “Fay” Haley-Graeter, 83, of Jonesboro, Texas went to be with the Lord on March 28, 2019.  Funeral services are scheduled for 2:00 p.m. Tuesday, April 2, 2019 at Scott’s Funeral Home Chapel.  Burial will follow at Bulman Cemetery.  Visitation will be from 5:00 to 7:00 p.m. Monday, April 1, 2019 at the funeral Home. Fay was born on August 27, 1935 in Clariette, Texas.  She married Albert “Butch” Graeter Jr. on July 15, 1952.  She was a wife and mother until she started working at Pattys of Texas in 1964.  In 1972, she became a beautician until April 30, 1981, when she started to work at the Texas Department of Corrections.  She retired from TDC on September 30, 1997.  Fay was a member of the Pleasant Valley Baptist Church since moving to the farm in Jonesboro in 1958. Fay was as wonderful cook, a loving mother and devoted wife.  Cooking and baking was her passion.  She loved gardening, taking care of Butch, canning vegetables from her garden, watching birds from her kitchen window, and visiting with her grandchildren, great grandchildren and great great grandchildren.  She was the sweetest person and loved everyone.  What an accomplishment she made! Fay was preceded in death by her parents; husband, Albert “Butch” Graeter; Sisters Bonnie Culver, Jauree Busby; Brothers Junior Haley, Charles Haley, and Johnny Haley. Fay is survived by many family members, Daughter, Judy Puryear and husband, Darrell; Son, Steve Graeter and wife, Brenda; Sister, Kathy Duncan and husband, Ron; Brother, Curtis Haley and wife, Melody; Grandchildren, Rodney Murry and wife, Jennifer; Hillary Keeton and husband, Leon; Amanda Treadway and husband, Chad; Stephanie Anders and fiancé, Raymond; Tammy Crowley and husband, Eddie and AJ Graeter; 9 great grandchildren; 4 great-great grandchildren and numerous nieces and nephews. Memorials may be made to the Bulman Cemetery Association, c/o Martha Courtney, 10278 CR 301, Jonesboro, Texas 76538.
To order memorial trees or send flowers to the family in memory of Wilma Fay Graeter, please visit our flower store.