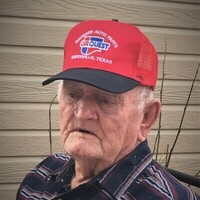 Sam was born on September 13, 1930 in Gatesville, the only child to the late John Bird and Christine Henson. He grew up in Coryell County, where he was a truck driver most of his life, in his later years he worked for Coryell County where he retired. He enjoyed driving the roads of Coryell County with his dog Oreo.

To order memorial trees or send flowers to the family in memory of Sam Byrd, please visit our flower store.