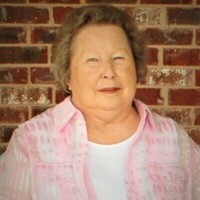 Peggy J. Blanchard, age 88, of Gatesville went to sleep and peacefully awoke, elated, to the long-awaited embrace of her beloved husband, Benny, in the Presence of Our Lord & Savior, on Sunday, May 22, 2022.

Funeral services will be held at 2:00 p.m. Wednesday, May 25, 2022, at Scott’s Funeral Home, with Pastor Lynn Parks officiating.  Interment will follow at Restland Cemetery.  Visitation with the family will be from 5:00 to 7:00 p.m. Tuesday, May 24th at the funeral home.

Peggy Jean Hamilton Blanchard was born on January 27, 1934, in Flat, Texas, to the late Earl (Buddy) Hamilton and the late Pearlie Bettge Hamilton.  She attended school in Flat, through her junior year. In 1948, she met a young man, Benny F. Blanchard, at a tent revival in Flat and from that time forward they only had eyes for each other and neither of them ever dated anyone else.  She and Benny were united in marriage on June 3, 1950.  Peggy soon graduated from Flat High School by correspondence, because married students were not allowed to attend school at that time.   She was a stay-at-home mom until 1966.  She worked briefly for the local A.S.C.S. office, and then started her career as an insurance clerk for Jackson Insurance. When Benny retired, she later retired from First Texas Agency, after working in the insurance field for 24 years.  Peggy and Benny traveled and took several cruises, with their favorite being the Alaskan cruises.  They also volunteered together at the Gatesville Care Center, making the “bread run” for several years for them.  She was renowned by her family and friends for her homemade buttermilk biscuits and monumental Saturday breakfasts.  Peggy was so very proud of all her children, grandsons, and great-grandchildren, and loved every moment spent with them.  However, she was dearly looking forward to the day she could be with her beloved Benny again!  She was a member of Eastwood Baptist Church in Gatesville.

Peggy and Benny were married for 69 years before his death in 2019; she was also preceded in death by her parents.

To order memorial trees or send flowers to the family in memory of Peggy Blanchard, please visit our flower store.