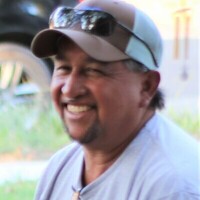 Oscar Esparza age 54 of Gatesville, passed away on Saturday, February 12, 2022 in Gatesville.

Funeral services will be held at 1:00 p.m. Tuesday, February 22, 2022 at Scott’s Funeral Home Chapel, 2425 E. Main Street, Gatesville.  Interment will follow at Restland Cemetery.  The Rosary will be recited at 5:00 p.m. Monday, February 21st, followed by visitation with the family at the funeral home.

Oscar was born on September 12, 1967 in Mexico.  He was the son of Jose Oscar Esparza I and Gloria Godina.  He grew up in Mexico and came to the United States in Texas in 1991.  He was a welder and built in the central Texas area.  He loved the outdoors and fishing and hunting.  He enjoyed getting together with family and grilling and always enjoyed a Bud Light.  Oscar always had a smile on his face and would help anyone he could.

To order memorial trees or send flowers to the family in memory of Oscar Esparza, please visit our flower store.