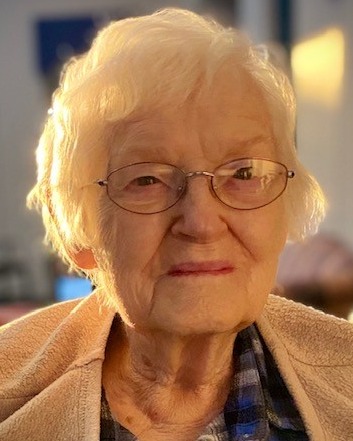 Funeral services will be held at 10:00 am on Saturday, January 28, 2023 at Scott’s Funeral Home with Pastor Sam Roberts officiating.  Graveside services will follow at Restland Cemetery.

She was born November 3, 1921 in Carden, Texas, a small community in the vicinity of Live Oak Baptist Church, Gatesville. She was the oldest daughter of four children born to John Floyd Patterson, Sr. and Georgia Elizabeth Jones.

Pat, as she was later called, attended Bigham School, a two-room school house, which also served as Live Oak Baptist Church. In eighth grade the family moved to White Hall for one year, and then to the Ames Community where she rode on the school bus driven by “Papa” Jess Weaver from grade nine until she graduated Gatesville High School in 1939 at the age of 17.

Pat was always athletic, always fast, winning races at the county meets. She was coached from an early age by Uncle Monroe Mayhew in basketball as a youth and continued playing the sport throughout her high school years. Pat was a member of the GHS Varsity Basketball Team, led by Coach Fred Schwartz, who gave her the nickname, Pat, short for Patterson. That team went on to win the Texas State Women’s Basketball title of 1939, the first year in the state of Texas that girls’ basketball had a state playoff. No other Gatesville team has been able to duplicate that accomplishment. Pat represented her team at the GHS Sports Banquet when they were inducted into the Gatesville Sports Hall of Fame in 2016.

She attended Parkland Hospital School of Nursing before raising her six children in the Ames Community on a family farm with her former husband, Elton Berlin Quicksall, whom she had married on August 10, 1942. At the time they were active members of Hay Valley Baptist Church. In 1952, Pat was employed at Coryell Memorial Hospital working as a nurse for many years. She completed LVN training in 1957, making the highest score in the state of Texas on her exam. She was later trained as a lab and x-ray technician serving Coryell Memorial Hospital, eventually becoming head of that department. Later in her career, she was employed at Darnall Army Hospital as Technician in charge of the Histology-Cytology Section of the Pathology Department until she retired receiving many citations for outstanding performances.

On February 15, 1972, Pat married John Henry Gilmer, the love of her life. He was a great husband, as well as an incredible step-father and Grandpop to the grandkids. After Pat retired from Darnall Army Hospital, they enjoyed traveling, gardening, fishing, boating, and family gatherings, as well as helping with the grandkids. John passed away August 3, 1992, leaving a great void in Pat’s life.

She was preceded in death by her parents, John Floyd and Georgia Elizabeth Patterson; all three of her siblings and spouses, Claydean and Ollie Patterson, Doris and Bruce Weaver, and Floyd and Jo Patterson; as well as her husband, John Gilmer; daughter, Terry Lynn Quicksall; son, Thomas Floyd Quicksall; son-in-law, Troy Kenneth Johnson; and granddaughter, Lisa McCorkle. Pat outlived all her childhood family and friends, as well as her GHS Class of 1939, which was one of the most difficult burdens in her life.

Memorial gifts may be made to “Dementia Society of America”, https://dementiasociety.charityproud.org, to make online donations in memory of Pat.

The family wishes to express their heartfelt thanks to all the wonderful people at Coryell Health Assisted Living and Bluebonnet Health Services Hospice. Their professional care and compassion during her time of residence there was most appreciated.

To order memorial trees or send flowers to the family in memory of "Pat" Nona Madalyne Patterson Gilmer, please visit our flower store.