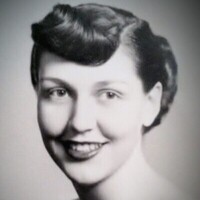 Mary Mackin, age 89 of Katy, formerly of Purmela, passed away peacefully on December 16, 2021 in Katy, after living a blessed and wonderful life.

Graveside services will be held at 12:00 p.m., noon, Tuesday, December 28, 2021 at Osage Cemetery. Following the service, luncheon will be catered by Bare Bones BBQ and served at the home of Donald and Julie Meyer in Mound. Honorary pallbearers are Donald Meyer, Tully Meyer, Slaton Meyer, Shane Cathey, Ty Cathey and John David Jubela.

Mary Louise Bunch Mackin was born on October 6, 1932 to Lloyd Newborn Bunch and Easter Mae Merritt Bunch in Oglesby, Texas. She lived in the Osage and Coryell City area as a young child.  She attended school in McGregor and Waco. When WWII broke out, her father could not get parts for his auto mechanic business in Waco, so the family moved to Corpus Christi where Lloyd was needed to work on military aircraft at the Naval Air Station. Mary attended school at Flour Bluff, Texas, where she was a cheerleader, homecoming queen, played volleyball and loved nearby Padre Island. There she met her high school sweetheart, John Gilman Mackin, and they were married on May 29, 1949 in Wichita Falls. They were together for 66 years and always sweethearts to the end.  Mary was a loving and devoted wife, mother and homemaker who spent her life raising her family and supporting her husband in his ranching and oil industry businesses. She adored traveling and followed her husband where his profession would take them, including living in Houston, Rio de Janeiro, Brazil; Aberdeen, Scotland and her favorite city of all, London, England.  She was a person who knew how to enjoy the essence of life in the big city as well as the tranquility of nature. She and John had a beautiful ranch near Purmela, where they spent many hours hunting, swimming, fishing, raising cattle and enjoying the peace and beauty of Coryell County. She also had a home in Katy, where she looked forward to hosting wonderful parties for her large family. Her favorite was the annual Christmas party, which was enjoyed by dozens each year.

In lieu of flowers, the family has designated that memorials be made to Osage Cemetery Association.

To order memorial trees or send flowers to the family in memory of Mary Mackin, please visit our flower store.