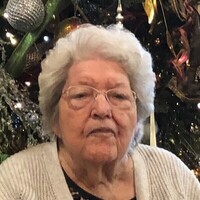 Mary Lee Box, age 91 of Gatesville, passed away on Monday, December 7, 2020 and is now lovingly reunited with Francis, her husband of 43 years.

Mary was born on September 28, 1929 in the Whitehall community of Coryell County, to the late David and Trudie Franklin Wilson.  She grew up in Turnersville, graduating from Turnersville High School where she enjoyed playing basketball.  She married James Francis Box on November 14, 1947 in Turnersville.  They moved to Gatesville and lived in central Texas all of their married lives.  Mary worked at Walls Manufacturing for many years.  She enjoyed bingo and dominoes, but her favorite passion was playing piano.  Her and her husband played for many years together, with Mike Kuzenka and the Country Sounds.  Francis preceded her in death on December 9, 1990.  She was a member of Calvary Baptist Church, where she played the piano for many years.

She was also preceded in death by five siblings.

The family would like to express their appreciation to Hillside Medical Lodge, for the loving way they cared for their mother.

In lieu of flowers, the family has designated memorials be made to the Boys and Girls Club, 2533 E. Main Street, Gatesville, TX 76528.

To order memorial trees or send flowers to the family in memory of Mary Box, please visit our flower store.