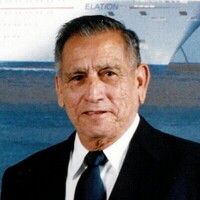 He was born to Pantalion and Angelita Manriquez on November 24, 1931 in Crawford Texas. He grew up and was educated in Gatesville Tx. He was a master Craftsman, skilled in drywall and carpentry. Had a part in building homes in Texas and Indiana.

John Frank was a loving uncle to numerous nieces and nephews. He was a magnet to children everywhere because of his gentle and mild spirit. John Frank was one of Jehovah witnesses and was part of Copperas Cove Congregation where he attended the local Kingdom Hall. He continued to serve Jehovah faithfully right up until his death. He took great pleasure in talking to others about the Bible and his wonderful hope for the future under Gods kingdom. He was a wonderful brother, uncle and Pa to many nieces and nephews. He will be greatly missed by all.

He is survived by Maecelena Deason, Juanita Peeler, Andrea Philbeck and his daughter, Ester.

To order memorial trees or send flowers to the family in memory of John Frank Manriquez, please visit our flower store.