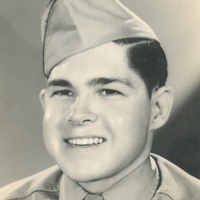 James M. “Shorty” Sullins of Oglesby, passed away on December 31st, 2018 in Gatesville.  Funeral services will be held at 11:00 a.m., Saturday, January 5, 2019, at First United Methodist Church in Oglesby with Rev. Robyn Ford officiating.  Visitation will be one hour prior to the service at the church.  Burial will follow at Post Oak Cemetery in Oglesby with military honors. Shorty was born on August 15, 1923 in Oglesby, Texas to Luther and Tisha Sullins.  He attended school in Oglesby and was a lifelong resident of the community he loved.  He graduated from high school in 1941, and worked various jobs before his enlistment in the United States Army on February 28, 1943. During World War II, he served in the United States Infantry in France, Germany, and Austria.  He was honorably discharged from the military service on November 19, 1945 having served in Headquarters Company, 3rd Battalion 180th Infantry Division.  Upon discharge, he returned home to join his father and brother in Sullins Grocery. On June 4, 1949, he was united in marriage to Doris Everett.  They remained in Oglesby, where Shorty worked in the family grocery store and served as a rural mail carrier.  In 1958, he was appointed as Postmaster, and served in that role until his retirement in 1992. Doris and Shorty were life-long members of the First United Methodist Church of Oglesby.  He has been a member of the Oglesby Lions Club for sixty five years.  He and Doris were active members of the Oglesby Ex-Students Association.  He was a fixture at school events, and attended every event he could supporting his grandchildren.  Regardless of how early you had to leave to get there or how late you might get home, Shorty had no time constraint on showing his support. Shorty was an example of being a good son, brother, husband, father, and grandfather. He was a wonderful caretaker of his wife until her death in 2015. He was loved and respected by his family, and his beloved community.  His life was an example of love and devotion to his family. He was preceded in death by his parents, sister Besse Lee Sanders, brother R.V. Sullins, and his beloved wife Doris. He is survived by his son and daughter-in-law Ronnie and Sharon Sullins; his grandchildren, Lauren Seymour and husband James, Lute Sullins and wife Kristen, and Payne Sullins; great grandchildren Hudson and Brooks Seymour and Grant Sullins; sister-in-law Dawn Barnes; one nephew, Everett Vandiver, one great nephew Scott Everett, and great nieces Cindy Stone, Jodie Tilmon, Jamie Sesay, and Kylie San Miguel. Memorials can be made to the First United Methodist Church in Oglesby or the Oglesby Lions Club. Please direct these memorials c/o First National Bank, PO Box 127, Oglesby, TX 76561.
To order memorial trees or send flowers to the family in memory of James M. Sullins, please visit our flower store.