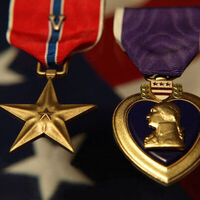 Herbert Morgan, age 80 of Gatesville, passed away on Thursday, December 3, 2020.

Memorial services with full military honors will be held at 9:00 a.m. Friday, January 8, 2021 at the Central Texas State Veterans Cemetery in Killeen.

Herb was born on August 23, 1940, in Lansing, MI.  He served in the United States Army for over 20 years, and retired on January 31, 1979, after returning to Fort Hood.  During his military service he saw combat action in Vietnam and was awarded the Bronze Star Medal, Purple Heart, National Defense Service Medal, Combat Infantryman Badge, Vietnam Service Medal with Two Bronze Service Stars, Republic of Vietnam Campaign Medal, Vietnamese Cross of Gallantry with Palm, Army Commendation Medal and Good Conduct Medal.  After his retirement Herb worked many jobs and worked for many years with the Army Corps of Engineers at Fort Hood.  His loving wife, Loretta June Morgan passed away on February 8, 2016.  He was a dedicated father and loving husband.

To order memorial trees or send flowers to the family in memory of Herbert Morgan, please visit our flower store.