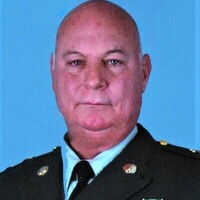 Gerald “Jerry” Wayne Spicer, age 63 of Gatesville, Texas, passed away on the morning of August 12, 2020.  A funeral service with Military Honors will be held 2:00 p.m., Friday, August 21, 2020 at Scott’s Funeral Home Chapel. There will be a come and go visitation on Friday prior to the funeral service. Barry Jordan will be officiating. There will be a celebration of Jerry’s life at Craig Bonat’s home with food and refreshments afterwards. Feel free to bring a side dish. Contact Craig Bonat for directions.

Jerry was born on November 20, 1956 in Orlando, FL where he was also raised, to the late Arthur and Lucille Murray Spicer.  He joined the Army in 1975 and trained and worked as a welder, serving a tour of duty in Germany and Korea. After his honorable discharge in 1985 at Ft Hood, Texas, he joined the fulltime National Guard at the M.A.T.E.S. facility in Gatesville, where he also resided. He continued to work as a welder for 26 years for the National Guard and retired in 2011. Jerry was a homebody and loved to repair and upgrade his home, as well as numerous carpentry work and other creative projects around the house. He was an easy going person, and readily made friends. He always had a smile on his face, and a great sense of humor.

He was preceded in death by his parents, Arthur Spicer and Lucille Murray Spicer; a half brother, Tom Coffman.

Jerry is survived by his brother, David Spicer (Cyln), and a sister Beverly Broyles. His nieces and nephews include Davinah Spicer, Tina Myers, Tim Broyles, Kevin Broyles (Kathryn), and Cynthia Jensen (Dakotah). He also had several grand nieces and nephews.

Donations to the American Cancer Society are greatly appreciated.

To order memorial trees or send flowers to the family in memory of Gerald "Jerry" Wayne Spicer, please visit our flower store.