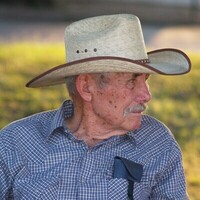 Fred D. Mariott, age 99 of the Pearl community, passed away on Wednesday, February 16, 2022 in Gatesville.

Funeral services will be held at 11:00 a.m. Monday, February 21, 2022 at Scott’s Funeral Home Chapel, with Dr. Danny Crosby officiating.  Visitation with the family will be one hour prior to services at the funeral home. Interment will follow at Pearl Cemetery.

Fred Duane Mariott was born on March 19, 1922 in the Peabody community of Coryell County.  He was the son of the late Samuel Thomas and Iva Dell Manning Mariott.  He married Oleta Upton on June 20, 1942.  He served in the Army Air Corp during WWII.  After his discharge, they moved back to Pearl and resided there all their married lives.  He was a farmer and rancher. His wife preceded him in death on August 22, 2016.  He attended Peabody Primitive Baptist Church.

To order memorial trees or send flowers to the family in memory of Fred D. Mariott, please visit our flower store.