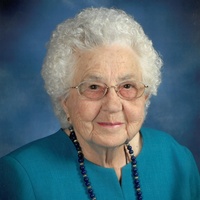 Elda was born on March, 26, 1924 in Coryell City to Albert and Martha Symank Richter.  She married Fritz (Fred) Reinhardt on August 30, 1947, and they were married 54 years.  After raising their four children she began her career with Walls Manufacturing in 1968 as a seamstress and retired in 1993 after 25 years of service.  She lived around the Coryell City area all her life, living in Osage from 1984 until 2016 when she moved to Hillside Medical Lodge in Gatesville.  She was a lifelong member of St. John Lutheran Church, where she enjoyed her Dorcas Bible study and quilting groups.  She enjoyed sewing for her family, gardening, canning, playing dominoes, especially when she had a lay down hand and hosting her family at her home.

She was preceded in death by her parents; husband, Fritz (Fred) Reinhardt; son, Kenneth Reinhardt; two brothers and three sisters.

She is survived by her daughter, Gale Pyle and husband, Ken of Eddy; sons, Kelvin Reinhardt and wife, Mary of Waco and Robert Reinhardt and wife, Liz of Gatesville; sister, Elsie Gohlke of Coryell City; brother, Elroy Richter of Lorena; six grandchildren; seventeen great-grandchildren, with another expected in August; and  many loving nieces and nephews.

The family would like to thank Kirt Love, Mom’s neighbor in Osage for looking after her for many years, which enabled her to live by herself until the age of 92.  The family would also like to express their appreciation to the staff at Hillside Medical Lodge in Gatesville, for their tender and loving care and her special friend and roommate, Laveda Littlefield.

To order memorial trees or send flowers to the family in memory of Elda Reinhardt, please visit our flower store.