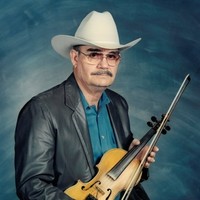 Private graveside services will be held at Hannibal Cemetery, near Stephenville, Texas.

Duane was born on March 2, 1935 in Stephenville, Texas to the late William Audrey Mooney and Laura Opal Anderson.  He grew up and went to school in Stephenville, Texas.  Duane served in the U.S. Navy, during the Korean Conflict and was honorably discharged in 1956.  He married Margie Estelle Wiese in 1956 and she preceded him in death.  He married Nancy Medford in 1982 and they have resided in Gatesville.  He retired from the Texas Department of Criminal Justice in 1997 after 20 years of service.  He was a member of the V.F.W.  His passion was music and playing the fiddle and guitar.

He is preceded in death by wife, Margie Mooney and brother, Carol Wayne Mooney.

In lieu of flowers the family requests that you donate to your favorite charity or a no kill animal shelter.

Please sign guestbook or send condolences if desired in the tab to the left.

To order memorial trees or send flowers to the family in memory of Duane Mooney, please visit our flower store.