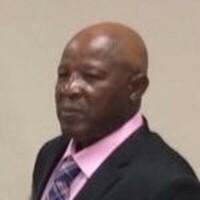 Funeral services will be held at 1:00 p.m. Saturday, November 19, 2022 at Mt. Calvary Church of God In Christ, with Elder Lee O. Ford officiating.  Interment will follow at Oak Grove Cemetery.

Wendall Darrell Booker was born on January 18, 1959 in Gatesville.  He grew up and went to school in Gatesville.  He married Irlette Bennett on October 14, 1994.  He worked for the City of Gatesville and later for Waste Management in McGregor for over twenty years.  He also worked with his brother Gerald with Booker Tree Service and Landscaping for many years.  He was a member of Mt. Calvary Church of God In Christ.

He was preceded in death by his parents, Clarence Jackson, Thelma Keller and her husband, Minister Elijah Keller; brothers, Johnny Booker and Clarence Ray Jackson, Jr.

To order memorial trees or send flowers to the family in memory of Darrell Booker, please visit our flower store.