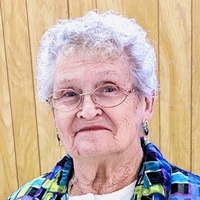 Daisy was born on Nov. 23, 1935 in Greenville, SC to the late Franklin Odell and Violet L. Rutledge Jones.  She married Alfred Wayne Hamilton on Feb. 2, 1955.  They met while he was stationed in South Carolina and she was a waitress.  After their marriage, they moved to Ft. Worth, Oklahoma and Missouri, where he was stationed in the Air Force.  In 1969, they moved to Oglesby, where they resided for 49 years and raised seven children.  She was also a waitress at Andy’s Restaurant in Gatesville for 14 years.  In her spare time, she canned and cooked.  She was a member of Pearl Baptist Church and former member of First Baptist Church of Oglesby.

Memorials may be given to Bluebonnet Health Services 307 Londonderry Dr. Waco, Texas 76712.

To order memorial trees or send flowers to the family in memory of Daisy Mae Hamilton, please visit our flower store.