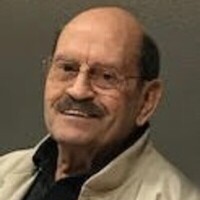 Carroll Shirley, 86, passed away peacefully on Sunday, April 18, 2021, in Temple, surrounded by his loving family.

Funeral services will be held at 2:00 p.m. Thursday, April 22, 2021 at Live Oak Baptist Church.  Interment will follow at Restland Cemetery.

John Carroll Shirley was born January 20, 1935 in the Coryell Church community near Oglesby.  along with his twin brother, George Harold Shirley, to the late Joe Frank Shirley, Sr. and Ruth (Rhoads) Shirley. Carroll resided in and around Gatesville all his life.  He graduated from Gatesville High School in 1953 and attended Texas A&M University for one year, where was a member of the Corps.  He worked as a lab tech for Rocketdyne of McGregor, for seven years and as a salesman in the life insurance business for American National Insurance Company in Waco for 34 years.

He accepted Christ as his Savior when he was twelve years old.  He was a member of Live Oak Baptist Church for over 60 years, where he served as Church Clerk, Sunday School teacher, Sunday School Director and Deacon for over 50 years.

He enlisted in the Texas Army National Guard in 1957 and was assigned to Company D, 949th Ordnance Battalion, 49th Armored Division as Company Clerk (SP4 E-4).  His unit was activated to Ft. Polk, LA for 10 months, from 1961 – 1962.  He was Honorably Discharged on 25 September 1962.  He returned to American National Insurance Company in Waco, until his retirement in 1997.  At that time, he began what he referred to as his favorite job – “Mr. Mom” to his two youngest children, who were school age.

He enjoyed gardening, watching baseball and football, reading, and going on camping trips with his family all over the United States.  He faithfully visited shut-ins and nursing home residents, bringing them church material.   He had a great sense of humor and didn’t meet a stranger.  He married Jane Davidson in Waco on October 15, 1983.  He was a loving husband, father, grandfather and great-grandfather.  His legacy lives on through them. He was very much a family man.

To order memorial trees or send flowers to the family in memory of Carroll Shirley, please visit our flower store.