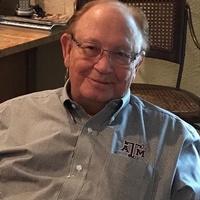 Bythel Eugene Oney was called to heaven April 18, 2019 in San Antonio, TX. Funeral services will be April 27, 2019, at 2:00 p.m., at Scott’s Funeral Home in Gatesville, TX with visitation one hour prior to the service.  Afterwards, his family will follow to lay Bythel at rest in the Pearl Cemetery, in his home town of Pearl, TX. He was born February 1, 1932 in Pearl, TX, the son of Richard Woodrow Oney and Eunice Louise Graham Oney. Bythel graduated from Temple High School, after which he joined the United Sates Air Force, serving his country during the Korean War (735th ACJW Squadron French Morocco).  Bythel graduated with a Bachelor of Electrical Engineering degree from Texas A&M University in 1958.   Upon graduation, Bythel accepted an Engineer position with Exxon in Kingsville, TX.   Soon afterwards, he was offered an Engineer position with Southwestern Bell Telephone (AT&T) in Dallas, where he quickly climbed the ladder to Division Manager, retiring after over 30 years of service. Bythel was a devout servant of the Lord, with continuing service at his church, The Kirk of the Hills Presbyterian in St. Louis MO, while furthering his education through studying the Bible. He served on numerous committees and was a The Kirk of the Hills Missions Committee Board Member. Bythel loved the Lord and loved serving him. Bythel had a variety of activities he thoroughly enjoyed; he loved gardening, golfing (traveling with the St. Louis Senior’s Golf Group), his woodwork shop, drawing charcoal sketches of old barns and boats; but, his heart was always in fishing.  From an early age, fishing in local waters in his home state of Texas, Ft. Meyers FL, Caribou Lake Lodge in Armstrong Canada, to his cabin on Lake of the Ozarks, he was always ready to throw a line in.  As a dear friend said of Bythel, “He had a way of making a person feel they were the most important and loved person in the room.” He loved people! Bythel deeply loved his family; there was never a doubt he would lay down his life for them.  Affectionate and a heart of gold… always words of wisdom… he loved to joke, tell funny stories and pulled plenty of pranks.  No matter the activity, golfing or fishing, he would always work in a Bible lesson.  His nickname, “Bible”, given by his oldest grandson, was a perfect fit and came naturally. He was preceded in death by his parents, Richard ‘Suid’ Woodrow Oney and Eunice ‘Enie’ Louise Oney. Bythel is survived by his wife, Lynda Gaye Kerns Oney; his two children from his previous marriage with Barbara Oney; daughter, Elizabeth ‘Gail’ Oney Yurick (Larry Wayne Yurick) of San Antonio, TX and her sons: Thomas ‘Ryan’ Trude of Durango, CO and Tyler Randolph Trude (Sasha Trude) of Kingwood, TX; Bythel‘s son, Richard Martin Oney of Pagosa Springs, CO and his children, Remy Nicole Oney of Denver, CO and Hunter Dunfield of Goodwell, OK.  Bythel was also survived by his children from Lynda’s previous marriage; son, Jeff Coleman and his daughters, Lauren Klemme and Daniella Coleman, of Kearny, NJ, and Leesa Coleman Greenberg (Bill Greenberg) and their children, Alex, Max and Amy Greenberg of Boston, MA. The family requests, in lieu of flowers, a donation would be a special way to honor Bythel.   Donations may be made in Bythel’s name to The Kirk of the Hills Presbyterian Church, c/o Missions Fund, 12928 Ladue Rd, St. Louis MO 63141 or the San Antonio A&M Club Foundation Opportunity Award Scholarship, c/o Aggie Park, 6205 West Avenue, San Antonio TX 78213.
To order memorial trees or send flowers to the family in memory of Bythel Eugene Oney, please visit our flower store.