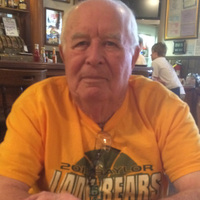 Family graveside services will be held at Restland Cemetery.

Billie, or as many called him, Bill, was born January 21, 1928 near Dawson, Texas. He attended school in Dawson before moving to McGregor where he graduated from high school. After graduation, he moved to Gatesville with his parents where his first job was working at his father's grocery store, Hale's Grocery, for $1 per day!

He met and married Oneta Fae Bay in Gatesville. They were married, December 28, 1948 and made Gatesville their lifetime home and the place where they raised their two children. They were married 62 years before Oneta's death in 2010. Bill spent a number of years as manager of H.B. Davis Variety Store in Gatesville and later was employed for many years at Powell Supply Company. He enjoyed traveling and traveled around much of the United States and Canada in retirement with his wife and adult children. Bill was an active member and deacon of First Baptist Church in Gatesville during most of his lifetime in Gatesville.

He is survived by his son, Terry Hale of Gatesville; daughter, Tammy Riccione and husband, Bob of San Antonio; grandchildren, Christopher Michael Riccione and Haley Bay Riccione, also of San Antonio, and Katy Riccione of Durham, North Carolina; sister, Carrie Lou Barnes and husband, Talley of Crawford; and numerous nieces and nephews on both the Hale and Bay sides of the family.

To order memorial trees or send flowers to the family in memory of Billie Hale, please visit our flower store.