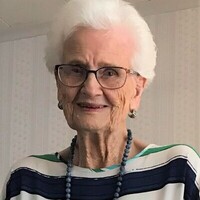 Alma Ellen (Fritz) Green, age 94 of Evant passed away peacefully at her home on Tuesday, September 15, 2020, with her family at her side.

Graveside services will be held at 1:00 p.m. Friday, September 18, 2020 at Murphree Cemetery in Evant, with Pastor Judith Sellers officiating.  The family requests that those in attendance follow Covid 19 guidelines, wear masks and observe social distancing.

Alma Ellen Green, fondly known as Fritz, was born on January 26, 1926 in Burkett to the late Alva H. and Norma Moore Clay.  She grew up in the Pearl community and graduated from Pearl High School in 1942, where she excelled in academics and sports.  She married Kenneth Conner on October 7, 1942.  They resided in the Bee House community, where they ranched and raised two daughters, Patsy and Phyllis.  He preceded her in death in 1962.  She later married Jesse L. Green on July 17, 1964 and they resided in Evant.  Jesse preceded her in death in 2002.  She worked at the phone company in Gatesville, now CenturyLink, as the business manager, until her retirement.  During her career in Gatesville, she made many close friends and acquaintances.  She served on the Evant City Council for many years as Mayor.  After her retirement, she also worked at the Evant Post Office for many years.  She was a longtime active member of the First United Methodist Church in Evant, where she served as music director for many years.  She touched countless lives with her commitment and testimony through her church and community service.

She was also preceded in death by a sister, Euvone; and son-in-law, Clynton Smith.

In lieu of flowers, the family requests memorials be made to her church, First United Methodist Church of Evant, P.O. Box 146, Evant, TX 76525.

To order memorial trees or send flowers to the family in memory of Alma (Fritz) Green, please visit our flower store.