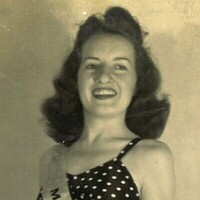 Alice Lee was born November 8, 1918 in Poteet, Atascosa County, Texas to J. E. and Eunice (Jordan) Wells.  She is preceded in death by her husband of 62 years, Weldon T. Mills, in 2003, her daughter, Mary Alice “Sue” Stewart of Conroe, Texas in 2015, her parents, three brothers and three sisters.  She is survived by two sons, Albert Weldon of Gatesville, Texas, Stanley Thomas and wife Nina of Belton, Texas, one sister, Mardelle (Wells) Odom of Newton, Texas and son-in-law Al Stewart, of Conroe.  She and Weldon took great pride in putting all 3 of their children through Baylor University in Waco, TX.  Mrs. Mills is also survived by 6 grandchildren, Kathryn and Hayden Mills (Albert); Lindley Stewart, Amy Stewart Thompson, and Keith Mills Stewart (Mary Alice); and Matthew Mills (Tom).  Known affectionately as “G.G. Alice,” she is also survived by her 7 great-grandchildren: Emilie Stewart, Joseph Ladd, Erich Jaeger, Katherine Jaeger, Lucas Thompson, Abigail Stewart and William Stewart, all of Conroe, Texas.  Alice Lee was a 5th generation Texan and resided in several parts of the State, including Pearsall, where she spent her childhood and was named Miss Pearsall; La Feria, where she and Weldon raised their children; and finally, Gatesville, where she and Weldon retired. Having lived in South Texas for many years, Alice Lee learned and perfected too many recipes to count and could cook incomparable beef and cheese enchiladas, chocolate chip cookies and blondies, to name a few.  Alice Lee was the best wife, mother, grandmother and great-grandmother anyone could ever have asked for and she will be sorely missed.

To order memorial trees or send flowers to the family in memory of Alice Lee Mills, please visit our flower store.